A boring house party is a nightmare for every host. With these simple party games, a happy and amusing evening with your college friends is guaranteed. What you will need besides our tips? Lots of drinks and people who will enjoy drinking them!

Kings Cup is certainly a party game for people with a cast iron stomach. You probably have a deck of 52 cards and some kind of large cup lying around somewhere – then you are well equipped and ready to go.

Place the empty cup, the so-called Kings Cup, in the middle of the table and the 52 cards around the cup. The party crew gathers around the table and everyone should have a drink ready. The youngest starts to draw a card and then everyone does the same (clockwise).

Some cards indicate who has to drink (Jack = men; Queen = women) or how many sips the person who picked the card has to drink. With the remaining cards you have the opportunity to set up your own rules. For example: whenever you pick one special card the person who took it can nominate a drinking buddy, who needs to drink every time they have to drink too!

If you fail at a task, you will have to take a sip. Here you can find a brief explanation of the rules of the game. The most important card is the King, because that is where the cup you placed in the middle of your cards steps into the conversation. If you draw this card, you have to empty your drink into the Kings cup! The fourth player who draws this card has to finish the Kings cup – a colorful mix of different drinks. Cheers! 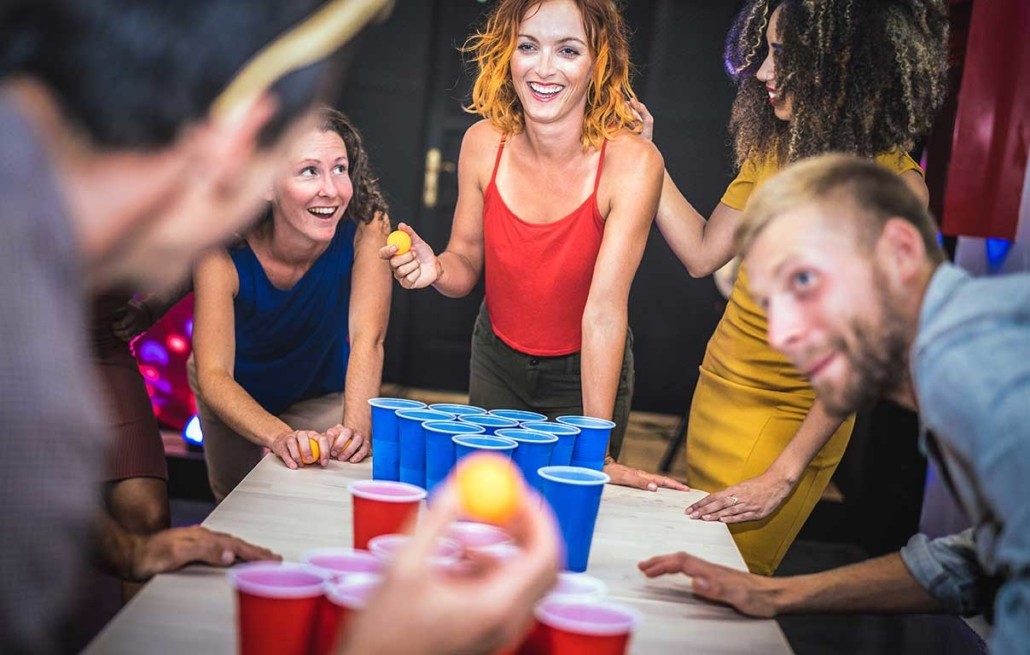 A real classic among drinking games. You probably know this game from American college movies. All you need are some cups, table tennis balls, a table and well, of course some beer.

Beer Pong is quickly set up: Grab a long table and place 10-15 cups in the form of a pyramid on each side (tip points towards the center of the table). Fill all cups with beer (or another drink of your choice). In addition to setting up the beer cups, you should also set up a cup full of water so you can clean the balls if they fall down or into the beer cups.

There are some rules to this game that must be followed: There are two teams, those teams usually include one or two players. Each player has one shot per round, which he aims at a cup of the opposing team. If the ball lands in one of the cups, the opponents must empty that cup immediately and the other team has one more shot. Balls that hit the table before going into a cup can be deflected.

You can be creative and create your own rules regardless. One piece of advice from our side: the more players there are, the more cups and throws per team you will need. The winner is the team which hits all cups from the opposing team first.

Flunky ball is a perfect summer party game because you will have to go outside. Mostly because you need quite a big area to play. Once you’ve found enough space, all you need is a 1.5-litre bottle, some kind of ball and beer for every player.

First of all, fill the 1.5-litre bottle halfway with water and place it in the center of your playing field. Same as in Beer Pong you need two teams, with equal amounts of players.

It goes like this: One Player from Team A tries to hit the water bottle. If the bottle falls, everyone from his team can start drinking their beer. In the meantime one player from Team B has to pick up the fallen water bottle, put it back in the middle and run back to his starting position. When he finishes and is back with his Team, Team A has to stop drinking. Then a player from Team B takes a turn and tries to hit the water bottle as well, if he proceeds to do so, someone from Team A has to pick up the bottle now quickly. This goes on for as long as one Team has finished all their beers. Every bottle must be empty.

You can always vary with the size of the playing field, the distance to the center and also with the ball – if you choose a heavier one it will be easier to hit the bottle and make it fall. But there are no limits to your creativity when it comes to bending the rules of this game.

And this is how it goes: All players stand in a circle. The first person adheres the card to their mouth by inhaling air evenly but strongly to make the card stick to their mouth. They now proceed to passing the card on to the next player. The card is not allowed to fall down or be touched by hand. If the card does fall, both players who screw up have to empty their cup and kiss after that, if you don’t want to kiss you can always choose the option of taking off one piece of clothing (or doing any other task you previously agreed on). So take a deep breath, suck in firmly and off you go! 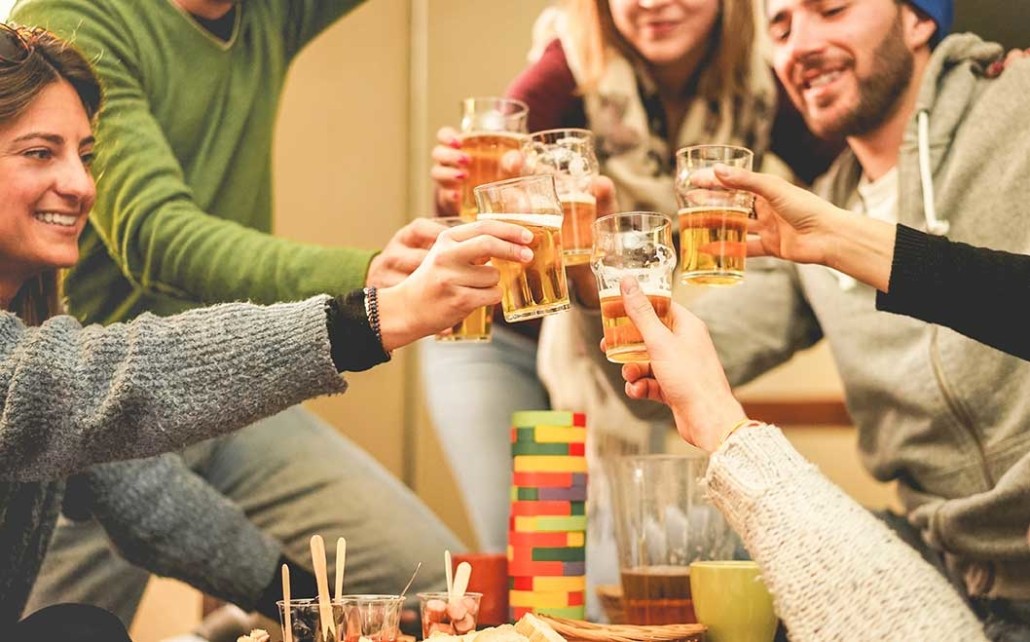 NEVER HAVE I EVER

This party game is similar to Truth or Dare and very popular amongst students all over the world. Probably because it’s really easy since you only need a handful of friends. This party game is also ideal for getting to know new people quickly.

This is how it goes: Make sure everyone has a drink and start asking a question, for example “Never have I ever played beer pong”. Now everyone who has already done this before has to drink. There is only one rule to this game: be honest, otherwise it’s only half as fun. Some of your guests will surely surprise you with their stories!

For this game, some preparation time is needed. You will need the game Jenga, most importantly the version with wooden blocks on which you can write.
Before the party can start, you will have to write a task on every single block. Those tasks can include things like “Everyone has to drink”, “Take your shirt off”, “The youngest can be skipped in the next round” and everything else you can possibly think of! Let your creativity run free!

By the time your guests arrive, you can start setting up the actual game. Just build the Jenga tower as the instructions say (always place three stones in one direction, lay the next three on top of those but keep them rotating by 90 degrees).

Take turns, pulling out bricks, completing the task and putting the brick on top of the tower. If the tower tips over, the game is over as well. Even though this game has a lot of preparation time you will see it will be worth it because the tasks make it an exceptional fun and more diversified game as most students are used to. Also: if you make it once, you can reuse it all the time!

We seem to live in a world where there is an app for everything. Same goes for party games! All you have to do here is installing the piccolo app on your phone, entering the name of all contestants and that’s it! Depending on the game mode you choose, tasks for your party guests are generated. Ranging from “Pre Party mode” to “dirty mode” and “crazy mode” – there is something for everyone and every mood.

IMPORTANT: Especially nowadays, regarding corona, you shouldn’t overdo it with the number of guests you invite. Also make sure that people who turn up are healthy, especially because some of those games can get you closer to each other than you may think.

Other than that, we wish you a lot of fun and a good time!

We are happy to help!